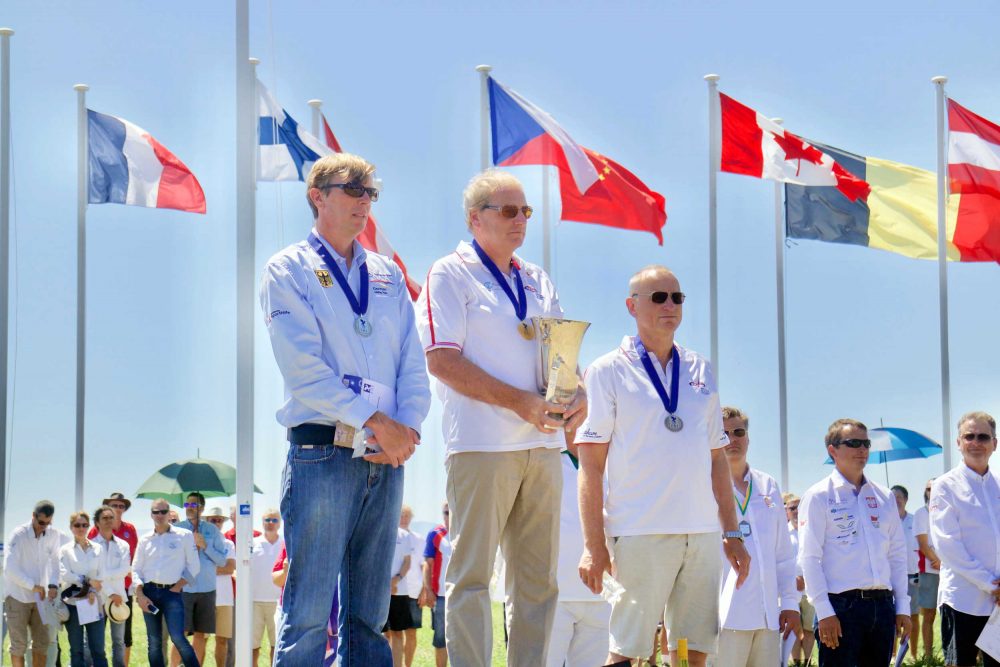 Russell Cheetham is the new World Open Class gliding champion. Cheetham secured his victory after a dramatic final day of competition at Benalla, Victoria, Australia. Cheetham was joined on the podium by team mate and double world champion Andy Davis who finished with a bronze medal.

In addition, a strong all-round performance saw the six-man British team, who were competing across all three classes, win another World Team Cup.

Both British medal winners in the Open Class flew extremely consistently throughout the marathon competition, where the daily courses ranged from about 200km to more than 750km, with both Cheetham and Davis going into the final race having finished in the top 10 in all but one race. The leading pilots all gambled on a late start in the final round allowing many of the early starters to creep up the overall standings.

Long after the thermals should have stopped and with Andy leading German contender Michael Sommer down the unrewarding ridges into the last turn, Russell took the direct route across the valley to the last turnpoint and found the key last half-knot climb to overcome the wingspan differential enjoyed by the German to finish and clinch the Gold medal.

“The flight was really tricky,” Cheetham said. “We knew we were starting too late, but we thought it was important to fly in the same time window as the German pilots who were the only ones who could take our medals away from us.

“I didn’t know at the time if I had enough points because I knew Michael (Sommer) had started two or three minutes behind and he spent the whole flight slowly catching up. He got into our gaggle so he gained the two or three minutes that might have been enough to take the lead, but it turned out that he needed four minutes and it wasn’t enough.”

Cheetham’s 19th place in the final 302km race coupled with his earlier lead was sufficient so see him hold onto the gold medal.

“It’s something that I have planned to do for my whole career,” he said. “I was fourth in the last two world championships which was very disappointing, so I’m really happy to have gone one better and gone straight to the gold. It was unbelievably close and I really have to thank Andy my team-mate,” he added.

“He has been brilliant the whole time. When we come to these events we fly as a team. This is our second championship flying together and the result proves that it works. – Report from Keith Auchterlonie, BGA

The BGA wants YOU to try gliding