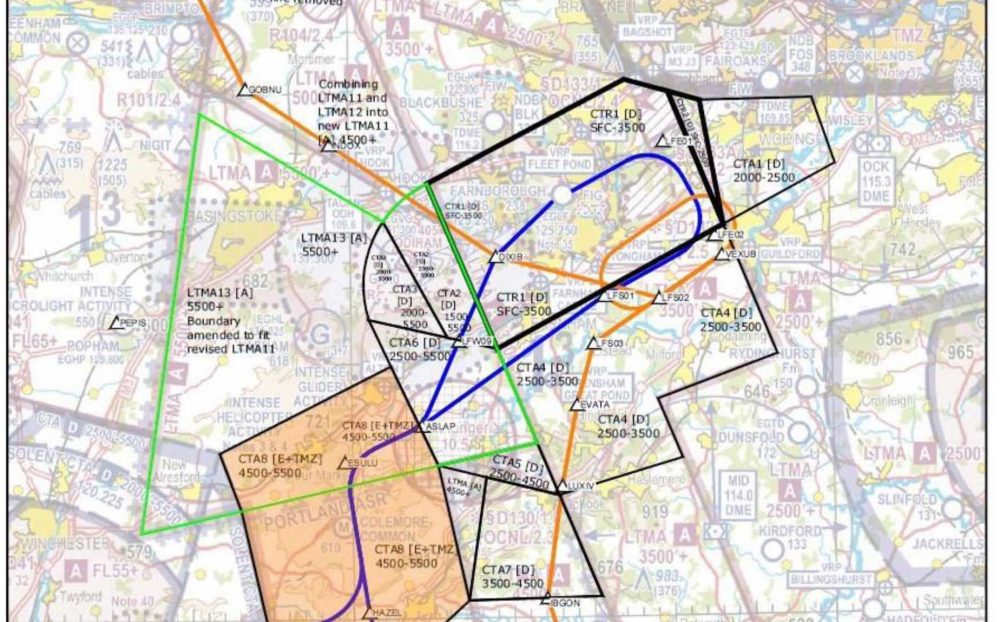 The British Gliding Association (BGA) has condemned the CAA’s decision to award Class D airspace to TAG Farnborough Airport, calling it “a new and more fundamental low point in the CAA’s attempts to be a responsible guardian and regulator of UK airspace”.

The BGA – patron The Duke of Edinburgh – continues in its hard-hitting statement released today:

“[It’s] the latest in a series of airspace decisions that test credulity and defy reason.

“This decision has all the hallmarks of being written as an attempt to show that process has been followed, but with little if any concern for making the correct or most appropriate decision.

“The emphasis on process is not matched by depth of analysis, logical rigour or concern for the legitimate needs and safety of all airspace users.

“The decision redirects huge volumes of airspace from the safe enjoyment of a great many pilots to serve the self-interests of one party alone based on a case that was presented only on the need to avoid any delays in inbound/outbound movements at Farnborough airfield.

“There was no safety issue that needed to be addressed – but in arriving at its decision, the CAA now runs the risk of creating a major one.

“The decision will give rise to the most complex volume of new airspace, the operation of which will critically depend on air traffic control and SSR working perfectly and at potentially greater capacity levels than almost anywhere else, in order to function never mind deliver the levels of service deemed necessary by the CAA.

‘There was no safety issue that needed to be addressed – but in arriving at its decision, the CAA now runs the risk of creating a major one’

“It will create an even more significant choke point in an area that already has one of the highest concentrations of aviation traffic in the country.

“That the CAA has not required the sponsor to categorically show that these risks have been quantified and can be reliably mitigated, and has not carried out its own independent assessments, demonstrate clear flaws in the CAA’s work.

“There is absolutely no imperative for TAG/Farnborough to have this airspace now. They have repeatedly stated that they can manage a doubling of their movements (to 50,000 per year) without the need for controlled airspace.

“The CAA has proved itself incapable or unwilling to determine the true need of an airspace change sponsor or, yet again, to take any view other than that of a sponsor.

“The GA community recognises the need for all parties to work on the appropriate evolution of UK airspace and the systems that will enable safe operation and equitable access.

“The inadequacy, however, of CAA analysis and decision making, coupled with a flagrant disregard for carefully made GA inputs exhibited in CAP 1678 indicate a very worrying future airspace scenario for GA.

“It is therefore imperative that GA works together to do whatever it takes to challenge and modify the CAA’s decision.

“There are several actions that can be taken and the BGA will work with its GA partners and others to establish the most effective approach available to us. The task may not be simple, but the cause is vital for the future of GA in the UK.”

The CAA is also facing a Parliamentary inquiry into its airspace decision making, led by the All-Party Parliamentary Group on General Aviation.