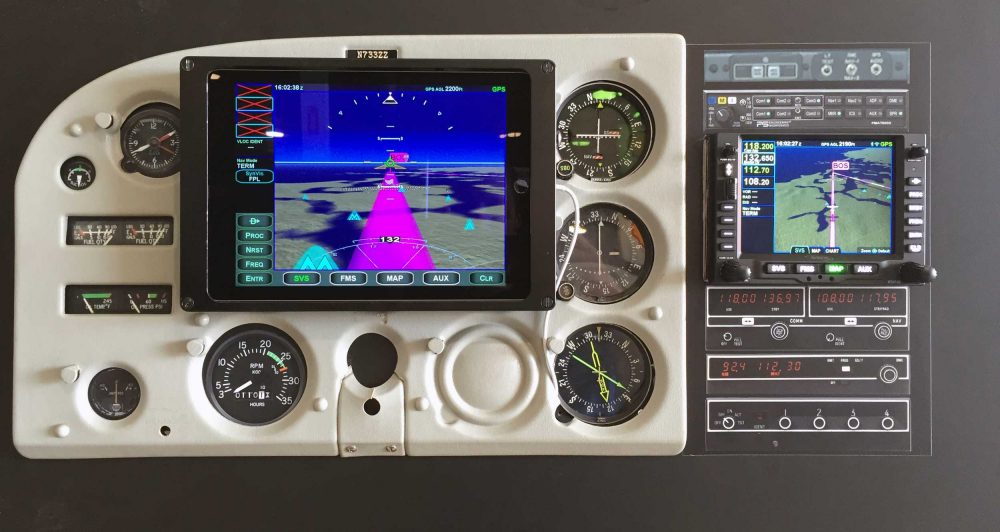 Using Avidyne’s IFD100 app – also new – the iPad can display a large format Primary Flight Display with Synthetic Vision. The iPad is mounted to a special bracket over the top of a standard six-pack of flight instruments in a typical Cessna 172 panel. The panel can be converted back to its original format simply by removing the iPad from the bracket.

“Because the IFD550 has a built-in Attitude Reference System (ARS) and integrated WiFi capability, we can wirelessly send all the GPS, flight plan, ADS-B plus Attitude information directly to the iPad,” said Avidyne CEO Dan Schwinn.

“It’s a novel concept, but we see it as a way of giving owners of legacy aircraft who might otherwise never have installed big glass the ability to now have access to Synthetic Vision on a large screen.”

In a second demo, Avidyne showed an IFD550 linked wirelessly to two iPads, one acting as a big-screen Primary Flight Display (PFD), and the other as a Multi-Function Display (MFD).

“Imagine the possibilities for LSAs, experimental aircraft, light trainers, and for the emerging hybrid and all-electric aircraft market,” said Schwinn. “As our IFD100 app evolves, and more and more third party apps come on line, you can easily see where this can take us in terms of making highly-advanced display formats available for very low cost.”

Avidyne also demonstrated its IFD440 FMS/GPS wirelessly connected with a huge-screen iPad Pro — the biggest of the iPad family with its 12.9-inch diagonal display — to emphasise that ‘Big Glass’ is available for virtually any general aviation aircraft.

“Connectivity is of growing importance in GA aircraft, and our in-flight wireless capability is allowing us to really expand the definition of panel-mounted avionics,” added Schwinn.