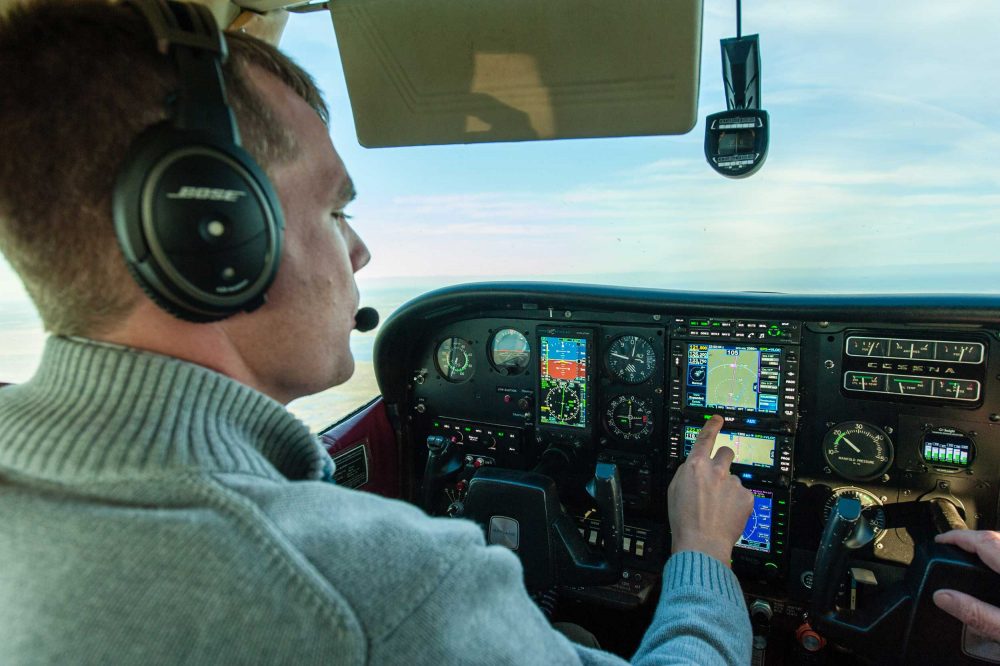 Avidyne’s IFD line of GPS/NAV/COMs offers the only real alternative to Garmin’s GTN line  of navigators. Announced at Oshkosh 2011, the IFD540 suffered a somewhat protracted development cycle before it saw FAA and EASA approval.

Designed as a slide-in replacement for the venerable GNS 530 and 430 series, the IFD540 and 440 approach the challenges of user interface and installation in a completely different manner than its competition.

The IFD operating logic is a development of another groundbreaking Avidyne product, the R9 flight deck, which was introduced to accolades. It saw some market traction with an STC installation in Cirrus aircraft but ultimately was a victim of unlucky timing, entering the marketplace during the bad times of 2009.

However, R9 pioneered Avidyne’s ‘Page and Tab’ user interface, making for a shallow menu structure and putting most features only a click or two away. The IFD series carries that ‘Page and Tab’ interface forward as well as adding a touchscreen interface. If the touchscreen isn’t your thing, then knobs and buttons offer yet another way to access nearly all of the IFD’s functionality.

The input of waypoints is simplified by Avidyne’s ‘GeoFill’ logic. Based on present position and previous waypoint, ‘GeoFill’ guesses waypoints as the pilot inputs the characters, with very good results, often filling in the correct waypoint after the first letter is entered.

In addition to having multiple ways to make inputs to the IFD, the display has numerous customisable data blocks, enabling an unprecedented level of control for the layout of the display.

The IFD100 app extends the IFD navigator to an iPad. Not only can the map, flight plan and synthetic vision be displayed but radios can be tuned and the flight plan can be amended.

Besides the basic functions of a Satellite-Based Augmentation System (SBAS) GPS receiver, 8.33 COM radio and VHF NAV Radio, the IFDs offer a synthetic vision display, depicting the aircraft not in a top-down map, but rendered from the perspective of the aircraft. The top of the range IFD550 adds an attitude sensor to further refine the synthetic vision display with attitude.

Terrain awareness comes as standard on the IFD540 and is optionally available on the 440. While not technically a full spec TAWS system, the IFD’s advisory terrain awareness feature has enough functionality to accomplish the goal of using a terrain database, GPS position and flight path to give a warning when you are heading for terrain or obstacles.

Showing its multifunction display heritage, the IFD540 can optionally display airborne weather radar or video from enhanced vision systems. Additionally,  Jeppesen approach charts can be displayed on the IFD540.

When it comes to flying the IFD540, the first thing you must keep in mind is that much of what you’ve learned in the past with other GPS navigators isn’t applicable to finding your way around the IFD. With that in mind, the ‘Page and Tab’ interface makes quick work of moving around between functions, once you’ve embraced the concept.

Visually, the display is functional. At times however, it does seem a bit unpolished. The smaller IFD440 suffers predictably from its smaller screen and omitted buttons. While its capabilities are the same, the smaller screen and user interface compromises made on the IFD440 should drive nearly all potential customers to strongly consider the IFD540 despite a $5,000 price premium.

For some functions such as Jeppesen approach plates, even the larger IFD540’s screen isn’t big enough and scrolling and panning is necessary. While usable with some effort, a tablet display of the approach charts is preferable, freeing the IFD display to be used for more useful things such as the moving map or flight plan functions.

Initially, EASA certification of the IFDs was lagging. However, after a near two-year delay Avidyne followed the FAA certification with EASA STCs for the IFD series. More than 40 models and derivatives of the Robin 200, 300 and 400 series aircraft were added recently to its EASA STC, which is held by AIRplus Maintenance of Friedrichshafen in Germany.

The IFD series is a serious contender for anyone considering a new GPS/NAV/COM. However, the decision should be made in the context of the panel as a whole. With increasing integration between PFDs, MFDs and GPS, and all the other ancillary equipment and sensors, if a whole panel refit is on the cards, consider if you want to be on the receiving end of sorting out integration issues between multiple vendors.

On the other hand, if you have a well-equipped panel from the last decade that you are perfectly happy with, the slide-in replacement concept has a lot of appeal and minimises the labour costs in rebuilding a perfectly good kit. Joe Fournier