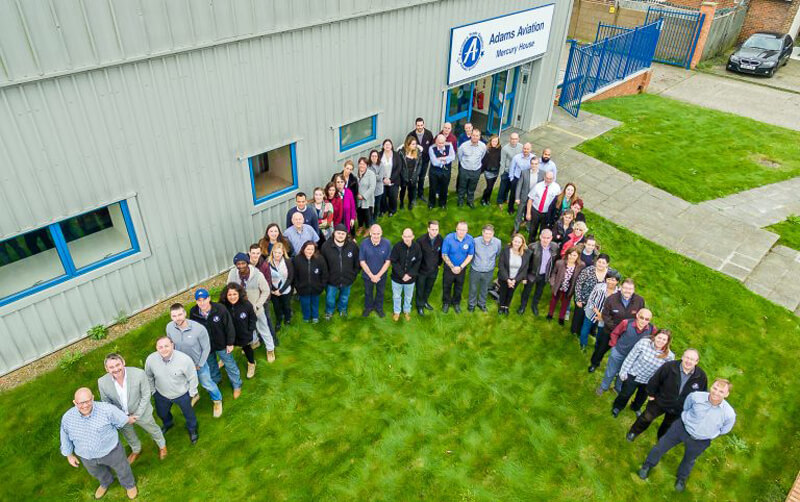 Adams Aviation had a busy time at AERO Friedrichshafen. As well as celebrating its 50th anniversary, the company announced it is now a distributor for Sensenich propellers and Superflite urethane aircraft covering materials.

The General Aviation industry gathered at a reception hosted by Adams Aviation at Friedrichshafen to hear how the company started in 1968 in the basement of a pub in Hammersmith, London.

These days, Adams Aviation speaks eight European languages, has a turnover of nearly £30m, and ships over 100 consignments every day. It stocks £4.25m worth of parts, including powerplants, avionics, airframe and pilots’ supplies. It also operates an EASA-145 approved ELT workshop, and a headset and loom shop.

Adams’ CEO, Stephen Gosling, acknowledged its humble beginnings and said they were “standing on the shoulders of giants in Ross and Dick Adams, my father, Frank Gosling, and Steve Langston, as the leaders who got us here.

“I am enormously proud in my colleagues, our team, the Adams family,” continued Steve. “Not just the colleagues here that face the customer and supplier every day but the half of Adams that you never see – the phenomenal hidden talent, behind the scenes, making it all go right.

“But the largest part of my pride comes in seeing who we work with, knowing that among our customers, our suppliers, our partners, are the very brightest and the very best.

“We are not as clever as those of you who design aircraft or aerospace components. We just help the customer to find the very best way to get their aircraft in the air, where it should be, released to service.”

The full range of Sensenich aluminium propllers is now available through Adams Aviation. They are fitted to many certified aircraft including Cessna and Piper, and to homebuilds such as Van’s and Glasair.

Superflite is the original urethane fabic covering, with System 7 being the latest product. Superflite manufactures needed to cover an aircraft – fabric, tapes, accessories, glue, primer, and paint – and it’s approved for use on certified aircraft or homebuilds.