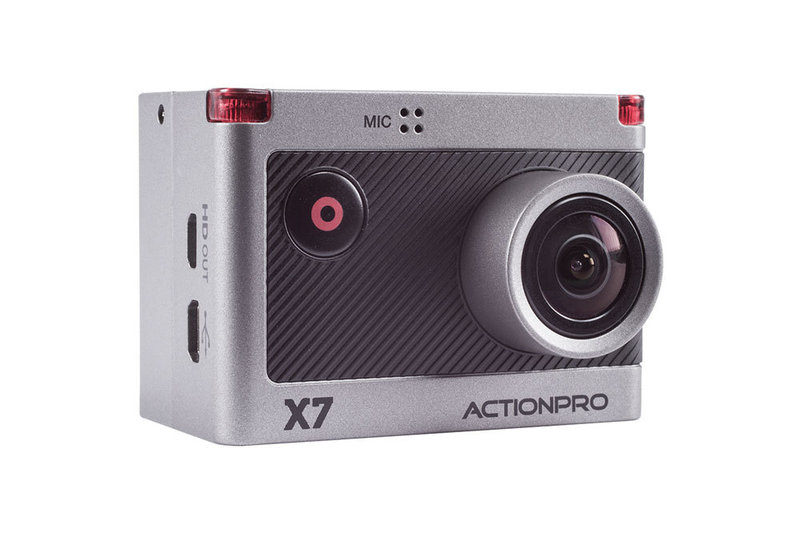 They say imitation is the sincerest form of flattery and if that’s true then I’m sure there’s an American manufacturer of action cams that’s feeling some love, as we’ve been finding the subject of our test, the ActionPro X7, frequently prompts the question, “Is that a new GoPro?”

With a 12 MP Sony Exmor sensor capable of shooting 1080p at up to 60fps, and 12 megapixel stills, the ActionPro X7 is a capable action cam. If you’re familiar with GoPro products, then you’ll find this very similar in appearance, although slightly heavier at 107g. A quality feel to the materials, along with the fit and finish of its assembly, suggests it’s going to prove robust over its lifetime.

When it comes to mounting, there’s a light-duty ‘skeleton’ case, which allows easy access to the unit controls, or you can opt for a fully waterproof case, if you are considering mounting the camera externally. There is a selection of mounts and 3M sticky pads for curved and flat surfaces, all of which use the familiar slot-in-to-lock action, and various bits of arm and connectors.

Other useful features are an audio-jack to USB lead and a lens cap. Sounds daft, but very few manufacturers provide something to protect the lenses of these bits of equipment, which is crazy considering how much handling they get.

Getting the X7 ready for use is easy – just add a Micro SD memory card (not included), then fit and charge the battery. Cycling through the various menus is relatively easy, using a combination of the mode and set-up buttons, but it’s the typical story of many functions buried within each menu. This isn’t necessarily a problem, more of a case of, “Where did I last see that?” Thankfully, it’s reasonably easy to follow, thanks to the 5cm LCD screen that fills most of the rear face of the camera.

There’s an ActionViewer smartphone control app that allows you to make setting changes remotely, as well as control video and still shooting. It’s easy to set up and allows you to see what’s going on in front of the camera; but actually using the app to control the camera showed it to be more than a little flaky. If your phone sleeps after you start filming, then a ‘camera busy’ notice stops you from reconnecting. It’s a similar story with taking stills, where I never managed more than three without the app crashing.

Far more reliable for remote control is the X7R Wi-Fi remote, which is an €80 option. Confusingly, the button on it marked with the conventional power symbol isn’t the one you need to turn it on – you’ll want the Mode button for that. It’s easy to pair to the X7, and once done allows you to switch between video and still mode, and to make recordings or take photos. Try as I might, I couldn’t make any actual setting adjustments with it though, and curiously, if you turned the camera off using the remote, then you couldn’t turn it back on remotely.

Set for 1080p and 60fps, the video results had good clarity and accurate reproduction of colours, although maybe not with the total sharpness that you get with the Garmin VIRB Elite or GoPro HERO3+ that we tested back in our February 2014 Action Cams group test. High- and low-wing cockpits are challenging exposure environments, and the X7 coped adequately with the range of lighting conditions. In our test, the footage usually appeared a little underexposed, which while not perfect, can always be tweaked during editing.

Initially set at a 60% level, the built-in microphone gave a very raspy reproduction of cabin noise, but this was improved by dropping to 30%, which made things much less harsh. If it’s really an issue for you, then use the supplied USB audio adaptor for an alternative input.

A fully-charged battery gave just over two hours of filming, but that dropped to 1hr 25min if the Wi-Fi was turned on. Recharge time from a mains source was just over 2hr 30min.

It’s worth noting that ActionPro make optional propeller filter for another €35, which does a great job of making propellers appear more normal on film. The unit also slotted straight onto our GoPro HERO3 Black when we tried it – useful if you’ve been looking for one of these and didn’t want to buy from the USA.

If you’re into cost-conscious purchasing, the ActionPro X7 should be on your list to check out. To make any comparison to the GoPro HERO3+ Black Edition, you have to add the extra €80 cost of the Wi-Fi remote, as GoPro includes that with its top kit. If you do that, the X7 still offers a competitive package that’s around €80 cheaper. – Ed Hicks