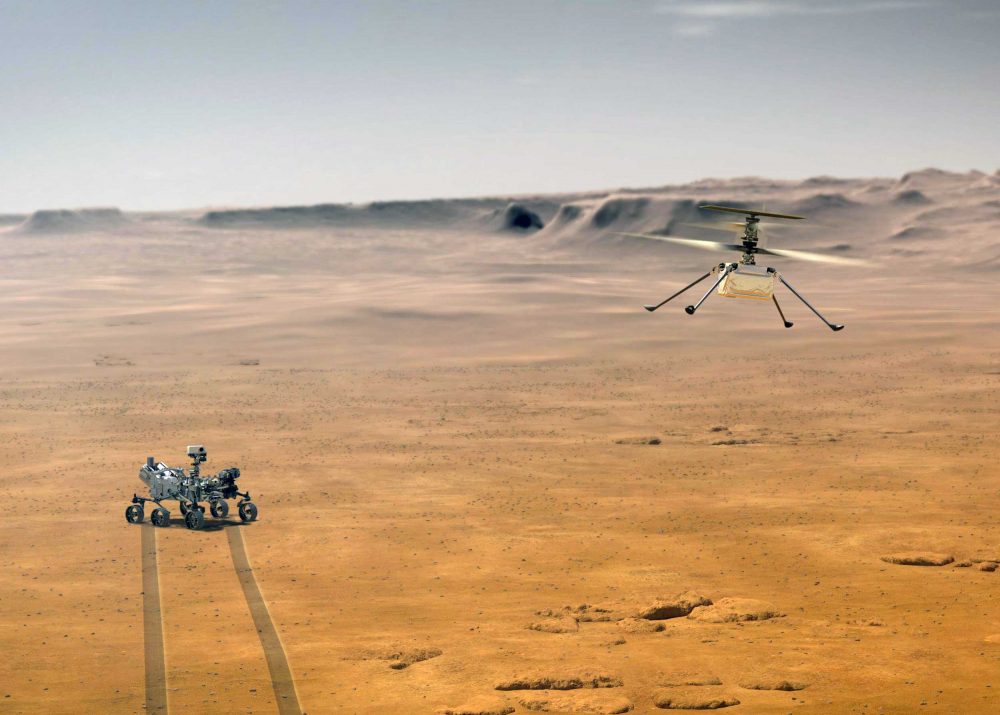 Just as the Wright Brothers were the first to fly a powered aircraft on Earth, they will also be a part of NASA’s first flight on Mars, scheduled for early April.

A piece of fabric from the wings of the Wright Flyer is aboard the Ingenuity helicopter that is preparing for its first flight.

NASA said, “An insulative tape was used to wrap the small swatch of fabric around a cable located underneath the helicopter’s solar panel. The Wrights used the same type of material – an unbleached muslin called ‘Pride of the West’ – to cover their glider and aircraft wings beginning in 1901.

“The Apollo 11 crew flew a different piece of the material, along with a small splinter of wood from the Wright Flyer, to the Moon and back during their iconic mission in July 1969.”

Just like the Wright Brothers did at Kitty Hawk on 17 December 1903, Ingenuity is there to prove flight is possible in the harsh world of Mars.

NASA points out that flying in a controlled manner on Mars is far more difficult than flying on Earth. The Red Planet has significant gravity (about one-third that of Earth’s) but its atmosphere is just 1% as dense as Earth’s at the surface. The temperature also plummets at night to 90 degrees below zero, which can freeze and crack components.

“Every step we have taken since this journey began six years ago has been uncharted territory in the history of aircraft,” said Bob Balaram, Mars Helicopter chief engineer.

“And while getting deployed to the surface will be a big challenge, surviving that first night on Mars alone, without the rover protecting it and keeping it powered, will be an even bigger one.”

Several factors will determine the precise time for the flight, including modeling of local wind patterns plus measurements taken by the Mars Environmental Dynamics Analyzer (MEDA) aboard Perseverance (the Mars lander). Ingenuity will run its rotors to 2,537rpm and, if all final self-checks look good, lift off.

After climbing at a rate of about 3 feet per second (1 metre per second), the helicopter will hover at 10 feet (3 metres) above the surface for up to 30 seconds. Then, the Mars Helicopter will descend and touch back down on the Martian surface.

Several hours after the first flight has occurred, Perseverance will downlink Ingenuity’s first set of engineering data and, possibly, images and video from the rover’s Navigation Cameras and Mastcam-Z. From the data downlinked that first evening after the flight, the Mars Helicopter team expect to be able to determine if their first attempt to fly at Mars was a success.

“Mars is hard,” said NASA. “Our plan is to work whatever the Red Planet throws at us the very same way we handled every challenge we’ve faced over the past six years – together, with tenacity and a lot of hard work, and a little Ingenuity.”